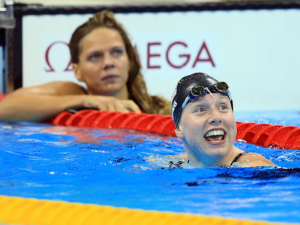 Stand up! Speak out! Show your stuff!

That’s what 19-year-old Lilly King did after winning the 100 meters breaststroke. But there is more!

Russian competitor, Yulia Efimova, who had been suspended twice previously for doping, had wagged her finger at Lilly Saturday night after winning her semi-finals heat. Lilly challenged by wagging back.

Finishing less than a second ahead of Yulia in the Monday night finals, Lilly’s behavior became one of the most memorable moments in the 2016 Rio Olympics thus far.

When asked if her win made a “statement” about the rivalry with Efimova, King said,

“I mean, obviously winning an Olympic gold medal is a statement. It meant we can still compete clean and be in the Olympics and that’s how it should be.”

So professional and so authentic! As a first-time Olympic contender, Lilly mastered the moment. She was brave enough to seize the impromptu opportunity, and create a positive example for others.

We, too, find ourselves in impromptu situations where we have the opportunity to speak out and make a difference. Capturing the right words to send the appropriate message is thought provoking and exudes exemplary self confidence.

As a public speaking professional, I applaud Lilly for taking that risk for all the television world to see. Measuring your words and making a positive difference!